I’m taking a break from writing this week, so instead of the usual posts, I would like to share with you some of the things I like to do for fun. It is no secret that I love Japan. It started out in college when I discovered anime and expanded to an interest in both current pop culture (fashion, video games, anime, food, music) and historical culture as well. I’ve been lucky enough to be able to go to Kyoto twice, and I’m eagerly anticipating my next trip. (I have no idea when that will be right now, but it’s going to happen.)

Fortunately, Hubby is equally enamored, so it’s one of many interests we share. We’re lucky that the Cincinnati area is dotted with many small Japanese markets, which allows us to get some of our favorite foods here at home. (I’m looking at you, oh nectar of life, C.C. Lemon.)

Recently, we discovered a subscription box service called Japan Crate. (Don’t even get me started on how awesome subscription boxes are…) Japan Crate is a monthly service that ships Japanese candy and snacks straight to your door. The pictures below are from this month’s crate, which arrived on Monday. (Admittedly, a couple of items are missing, having been devoured almost as soon as the box was opened.) Even the box itself is cute! ^_^ 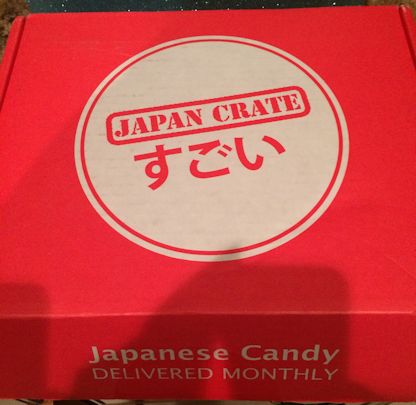 Each of the premium (aka, biggest) boxes comes with a DIY candy kit. The DIY kits cover a range of activities, from making common things like chocolates, gummies, or hard candies to more unusual things like mochi or…foaming toilet candy.

This kit was pretty straight forward, with little preparation required. Each one comes with a randomly colored toilet, a set of decorative stickers, and three pouches of candy. Just assemble the plastic parts! 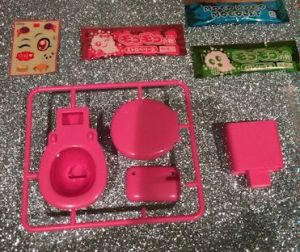 The candy flavors included are: strawberry (pink), cola (blue), and melon (green). Making the candy is simple. Pour one candy pouch into the toilet tank and shake to distribute evenly. After adding two lid-fulls of water, it will look like the leftmost picture below. Admittedly, not too appealing at this point. Next, stir with the included tiny straw and it will react to create a yummy foam! It tends to overflow, so you have to sip the foam down to keep it from spilling out of the bowl. Never before has eating something from a toilet bowl been so delicious. It tastes like pop rocks x 1000. 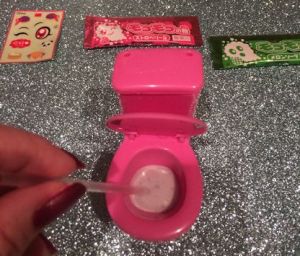 Sumo was intensely curious about what was going on in the kitchen. But, since he doesn’t like to walk on tile, he sat in the doorway with is mood fluctuating between pouty and hopeful. Sorry, Sumo, dogs aren’t supposed to eat out of toilets. ^_-