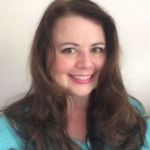 Rachel R. Smith lives near Cincinnati, Ohio with her husband and the cutest dog in the world, Sumo. When not writing, she plots to fill the interior of their home with books and mineral specimens and to cover the exterior with roses.

If you are still reading this page, I assume that you are either very, very lost or genuinely would like to know a bit more about me. For those that are lost, well, perhaps you should skip the internet and read a good book instead? ^_- For the rest of you, here goes:

I did not start out my career with the intention of becoming a writer. I am a scientist. I have been interested in the sciences, in one form or another, since I was a child—except for a brief period of time in Kindergarten when I wanted to be a florist. Hey, I was 5. I started out wanting to be a paleontologist, digging for dinosaur bones in the backyard. This wasn’t an entirely silly idea since fossils of ancient sea life are abundant in southwestern Ohio. From first grade to sixth grade I wanted to be an astronomer. It was in seventh grade that I fell in love with chemistry. I have both a Bachelor of Science and a Master of Science in Organic Chemistry, with a secondary focus on X-ray Crystallography (the study of the three-dimensional atomic and molecular structure of crystals). I have spent the first twelve years of my professional career working as a materials scientist.

The whole time I was following my scientific pursuits, and for as long as I can remember, I’ve had an on-going story running through my head. Whenever my mind began to wander, it would drift back to the same characters whose lives played through my mind like a movie. The best analogy I can think of is that my imagination is like a TV antenna tuned into the story of Renatus. I thought that this was normal and that every person daydreamed in the same way. I don’t even remember how it came up in conversation, but one day I mentioned something about the story and the characters involved to my mom. She was the one who told me that the average person does not have an unfolding saga rolling through their imagination. It was also she who suggested that I share the story and write a book.

It seemed like a good suggestion. So I write, not because I have an inherent passion for the activity of writing itself, but instead because I have a story I want to tell. Nerissa, Raysel, Rian, and all of the characters are almost as real to me as actual people. They have likes and dislikes, pasts and passions, even if not all of their experiences fit into the main story. When I write, rather than constructing events and settings, I just try to relate the events of the story as they appear in my mind. At this point, I have plans for three main story arcs, each composed of about 4 books, for a total of 12 in the series. I hope that you enjoy reading my story as much as I enjoy telling it!