The complete first story arc of the series, Reflection, is comprised of four books. Nerissa and the Ohanzee’s story continues in the second story arc, Revenant, which begins in Book 5, Revenant: The Undead King.

An Heiress, an ancient prophecy, and a masquerade… 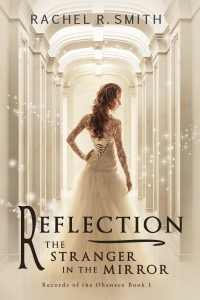 Nerissa, the Heiress of Chiyo, prepares for the masquerade celebrating the twentieth anniversary of a thwarted assassination attempt on her family. Longing to be admired for herself and not her title, she arranges to switch costumes and enjoy the ball in blissful anonymity. But, when the fateful night finally arrives, a prophetic warning of a second attack arrives too late, and the evening turns from revelry and romance to violence. After being pulled from the chaos by an enigmatic guardian, Nerissa learns that the Royal Family has been concealing a formidable secret for generations—and it is only one of many that are about to be revealed.

Click here to go to sample chapters for Book 1.

The masquerade is over and the masks have been removed. But not everyone’s true face has been revealed…

King Casimer of Marise has assassinated the Royal Family of Chiyo and usurped the throne. He doesn’t know that the Heiress of Chiyo, Nerissa, is still alive and has joined the Ohanzee, a group of guardians who have secretly protected the country for generations. Disguising herself as a young man, Nerissa seeks a way to depose Casimer and restore her country’s independence. An uncanny stroke of luck leads her to the mysterious seer Shae, who has discovered a fragment of an ancient prophecy warning of events that will bring about the end of civilization. And Casimer has already set some of those events into motion.

With the future of not only Chiyo, but all of Renatus at stake, Nerissa and her six Ohanzee companions set out on a journey in search of the remaining fragments, where they will find unlikely allies and uncover new enemies.

Click here to go to sample chapters for Book 2.

Beware of the spirit that guards the book in the cave.

After fending off an ambush by Senka operatives, Nerissa and her Ohanzee companions seek refuge in the mountain province of Rhea. With the drawbridges raised and the borders secure, they have left the Senka behind for now, but they may have traded one perilous situation for another. Although the third book is in Rhea, it has been hidden deep within an abandoned mine where it is protected by a cunning trap. Retrieving the book means facing both natural and supernatural threats, and Nerissa will learn that crystals hold power far greater than she ever imagined. Meanwhile, Desta, daughter of the renowned seer Shea, reveals that she has begun to have prophetic dreams of her own—and she is not the only member of the group with an awakening talent.

Click here to go to sample chapters for Book 3.

Not everything in the Records of the Ohanzee matches what is written in the history books.

Having learned the disturbing news that the fifth book has fallen into Casimer’s hands, Nerissa and the Ohanzee make their way to the city of Maze where the Festival of Flames is about to begin. They plan to rendezvous with Charis and retrieve a set of spirit crystals that are elements crucial to fulfilling the prophecy. But when a letter arrives in the middle of the night from an anonymous sender claiming to be the owner of the sixth book, the Ohanzee will discover there is far more going on in the city than just celebrations.

Click here to go to sample chapters for Book 4.

When the dead walk among the living, the Revenant will seize the empty throne.
King Casimer has been defeated, and Nerissa has finally cast aside her guise as Caeneus and triumphantly assumed her rightful role as the Blood of Chiyo. But saving her country from disaster isn’t as simple as retaking the throne.
The prophecy warning of events that will bring about the end of civilization has not yet been fulfilled, and an ancient weapon of untold power is about to be rediscovered. The future of Chiyo, and all of Renatus, depends on Nerissa finding it before her enemies do.
All the while, fires rage throughout the capital city, set by the Senka to undermine the stability of Nerissa’s rule, and rumors of Casimer’s inexplicable survival have begun to swirl. Is it a miracle or something more sinister at work?

Click here to go to sample chapters for Book 5.

Revenant: The Queen’s Assassin (Records of the Ohanzee Book 6)

Somewhere out there is a crystal capable of untold power…

The Senka’s most recent assassination attempt sends Nerissa and the Ohanzee back to Darnal to regroup, while Rian leaves for Marise to discover the truth behind Casimer’s miraculous survival. Even though Nerissa has spent all of her efforts trying to restore peace without resorting to bloodshed, that may not be an option anymore. With every passing moment, the tension in both Chiyo and Marise grows and Nerissa’s search for the prophesied weapon—a legendary crystal—becomes more urgent. But the prophecy is as cryptic as ever, and even if Nerissa finds the gem, it’s unclear whether she should use it or destroy it. She will have to decide quickly, however, because there are more forces at work behind the scenes than anyone knows, and a drop of poison may be all it takes to spark an all-out war.

Click here to go to sample chapters for Book 6.