Echidna’s hands trembled as she held the blade of her trimming shears to the orchid’s stalk. She’d thought that spending the morning in the greenhouse would calm her nerves, but try as she might, she simply couldn’t stop herself from shaking. Though the recent snowfall meant that news from Nyx had slowed, there were still plenty of rumors circulating out from the city. And that is exactly what the news reports were—rumors. She refused to believe there was any truth to them whatsoever.

Or, at least, she wanted to refuse to believe them.

The task was becoming more difficult with every passing day. Ever since her arrival at the estate, Casimer’s letters had come with unfailing consistency—two each day. Then, last week, a day came when only one arrived. Echidna had written off the change with little concern. Her husband was a busy man. A king could not be expected to always find time to write. But there were no letters the following day, or the next, or the next either. Every time the sun set with no letters at all, the terrible rumors became harder to ignore.

A knock came at the greenhouse door. The gentle rapping was barely enough to rattle the door’s loose hinges, yet in her current state, the suddenness of the sound was enough to startle Echidna. Her shaking fingers tightened reflexively on the trimmers and lopped off the elegant flower’s stem near its base.

Staring down at the fallen stalk in vexation, she muttered a curse unbefitting a lady of her station and then quickly pasted a serene expression on her face. Turning toward the entrance, she said, “You may come in.”

A servant stepped in and bowed low. Echidna needn’t worry about controlling her facial expression, for the man kept his eyes trained on the floor. “My Queen, the mail has arrived.”

“Have any letters arrived from the King today?”

Somehow, the man’s shoulders dipped even closer to the ground. “No, My Queen.”

“Very well,” Echidna said, making sure her voice betrayed none of her emotions as she waved dismissively. “You may go.”

Once the door closed behind him, she took an unsteady step forward and braced herself against one of the worktables. There were too many rumors of the Heiress of Chiyo avenging her parents and returning to Niamh, too many rumors that Casimer had suddenly and inexplicably withdrawn from public engagements, and too much time had passed since the arrival of his last letter. Echidna heaved one deep breath after another as the reality of the situation stripped away the denial that had been separating her rage and her grief.

There was only one thing that all of it could mean.

Little Heiress, do you think you know something about revenge? She gripped the benchtop so tightly she could feel the impression of the wood’s grain beneath her skin. If you want bloodshed, I will paint the streets of Niamh red.

Just then, someone opened the door to the greenhouse again, and this time, they didn’t bother knocking or waiting to be admitted.

Echidna whirled around, not caring who was about to witness her fury. “How dare you enter without—” she screeched, but the rest of her reproachful words died in her throat. That regal stature, that black hair, those blue eyes in that familiar face…the sight of him made all of her wrath evaporate in an instant.

She ran across the greenhouse and flung herself into her husband’s arms. “The rumors said that you were dead!” she sobbed into his chest.

Casimer grunted in pain at the contact. “As you can see, I am most definitely not,” he said as he gently pushed her away.

“Every rumor has a small grain of truth within it,” Casimer answered with a wan smile on his face. He unbuttoned his shirt to reveal a set of stitches holding closed a puckered wound just a few inches below his heart. “There is very little difference between dead and gravely wounded to the rumormongers, but the distinction makes all the difference in the world to me.” 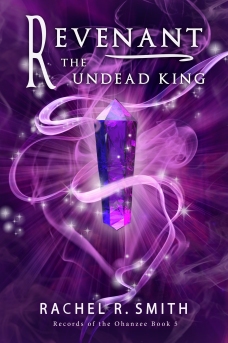 Now available in e-book and paperback formats from Amazon.